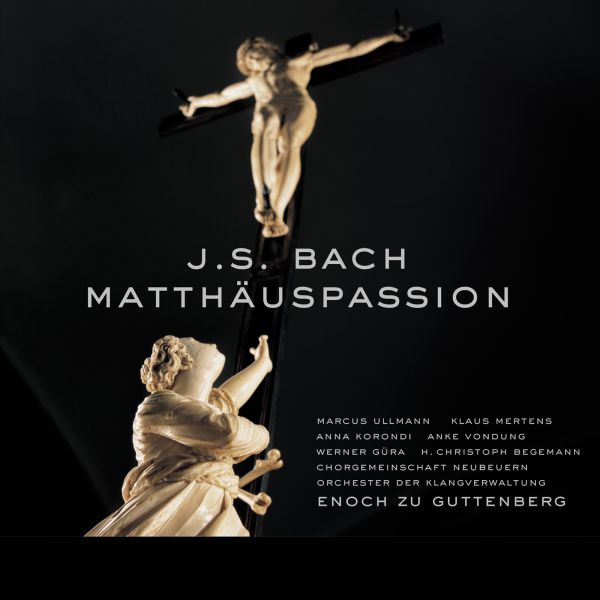 Recorded at the Neubeurer Hall, 2002

The Real Top 10 Bach Recordings ... The coup of Guttenberg’s interpretation of the Matthew Passion is that he elevates—or rather: uncovers and restores—the climax of Matthew’s gospel as the highpoint of Bach’s work. It’s often missed because it is so short, but it’s unmissable in the story. It is at Matthew 27:54 and part 63b (NBA) in Bach, at the end of the crucifixion scene. Witnessing the gruesome death of Jesus and the ensuing earthquake, the heathen Roman executioners and their captain (of all people) are the first non-disciples to grasp the meaning of what has happened before them, and thus the beginning of Christendom. Their hearts change and they acknowledge (“Due chori in unisono”): “Truly… truly: this was the Son of God.” Notably, it’s the only time Bach lets both choirs sing unisono. Two bars, not even 20 notes – but here elevated to the pinnacle of the whole work. Forty (!) seconds so intense, so heartfelt, so earnestly passionate, that absolutely without fail I tear up every time I hear it. Reason enough to make it my top choice.
Jens F. Laurson, November 2015

Purchasers of the new FARAO set will be acquiring an interpretation that should prove challenging and rewarding for years to come ... The soloists are all excellent ... All sing with a directness of approach and freshness of timbre that is just right ... With nearly 40 versions of the St. Matthew Passion currently available, it is hard to see the need for another recording, yet this new account is certainly attractive enough to be numbered among the best of those that use conventional modern instruments and show deep understanding of period-performance practice ...
Peter Branscombe, 2003 Sept

There has never been such precise creativity, such diversity in the sound of divine suffering.

" …A magic moment of musical interpretation!"